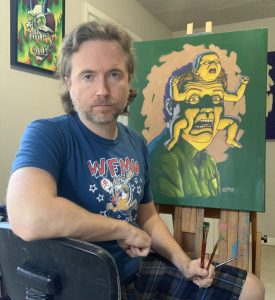 Growing up surrounded by industrial pollution in Bayonne, NJ, I was always fascinated by the possibilities of genetic mutation – how the waste products of human progress gone awry can rewrite our DNA to create physical monstrosities.

So, too, does social pollution trigger us to adapt, voluntarily and involuntarily reshaping our mannerisms, our dialects, and our styles of dress in order to either stand out or blend in with our surroundings, often leading to psychological monstrosities.

My paintings are an examination of identity: who we are, how we see ourselves, how others see us, and how we expect to be seen. Within each of us, there exists a myriad of smaller selves, like a Parliamentary body of wild animals, negotiating between each other and the outside world to form a civilized, cohesive whole.

In life, our true colors can get washed out into the background while outside parties cast their lights on us, both illuminating and obscuring the selves we work so hard to create. In each of my paintings, home tones from the character’s flesh and attire form the background, while tinted lights from opposing sides give us a tainted hint of each character’s appearance. I have gone out of my way to leave the background visible between the highlights as an invitation to engage with the character’s natural or crafted self, while the highlights themselves are rendered loosely in oils, to effectively communicate the incompleteness of anyone’s identity and the conflict between our visions of ourselves and the visions cast upon us by others.

The titles of the pieces, typically the spotlighted character’s own words or those of a friendly narrator, serve as a further invitation to immerse yourself into the scene, to let your own imagination build upon the implied narrative and create a story that is yours alone. One of my greatest joys as an artist is hearing people share their interpretations of my monsters and how it relates to the identities they’ve constructed throughout their lives. In doing so, everyone who shares their reaction becomes a collaborator and everyone gets a little more comfortable with their own monsteriffic selves.

Born in Bayonne, NJ in 1979, Justin Smith began drawing and painting before he can even remember. From early on, the pollution of his hometown’s industrial landscape, coupled with his love for science fiction films and superhero comics, sparked a lifelong fascination with the havoc man has wreaked upon the environment and what kind of repercussions it may have on our bodies and minds.

As a Media Arts major at New Jersey City University, he combined his many artistic skills and interests into a body of work that was both highly experimental and easily accessible, displaying his unique perspective in every film, painting, cartoon and soundscape he produced. Meanwhile, he began carving out a reputation as a formidable promotional artist for the underground rock and metal scene, creating memorable posters, t-shirts, and CD covers for bands such as Clutch, Negative Reaction, Atomic Number 76, and Abraham’s Meat Plow.

Upon graduating from NJCU, he quickly put his skills to use as a freelance storyboard artist and production designer whose clients have come to include MSNBC, Charles Schwab, and Mighty Coconut.

After moving to East Hampton, NY in 2005, Smith joined the Bonac Tonic Art Collective and participated in all their events from 2006 to 2012. It was during this time that Smith’s true artistic voice began to emerge via “The Mutonians,” a series of portraits depicting biomechanical hodgepodges and cryptozoological anomalies that spring forth when Smith’s imagination runs loose. It didn’t take long for these unusual pieces to find homes in some highly esteemed collections throughout the Northeastern United States.

Since relocating to Austin, Texas in 2013, Smith has once again kept busy as an illustrator and storyboard artist, while gearing up to start fresh with a new series of paintings highlighting the continuing saga of The Mutonians.