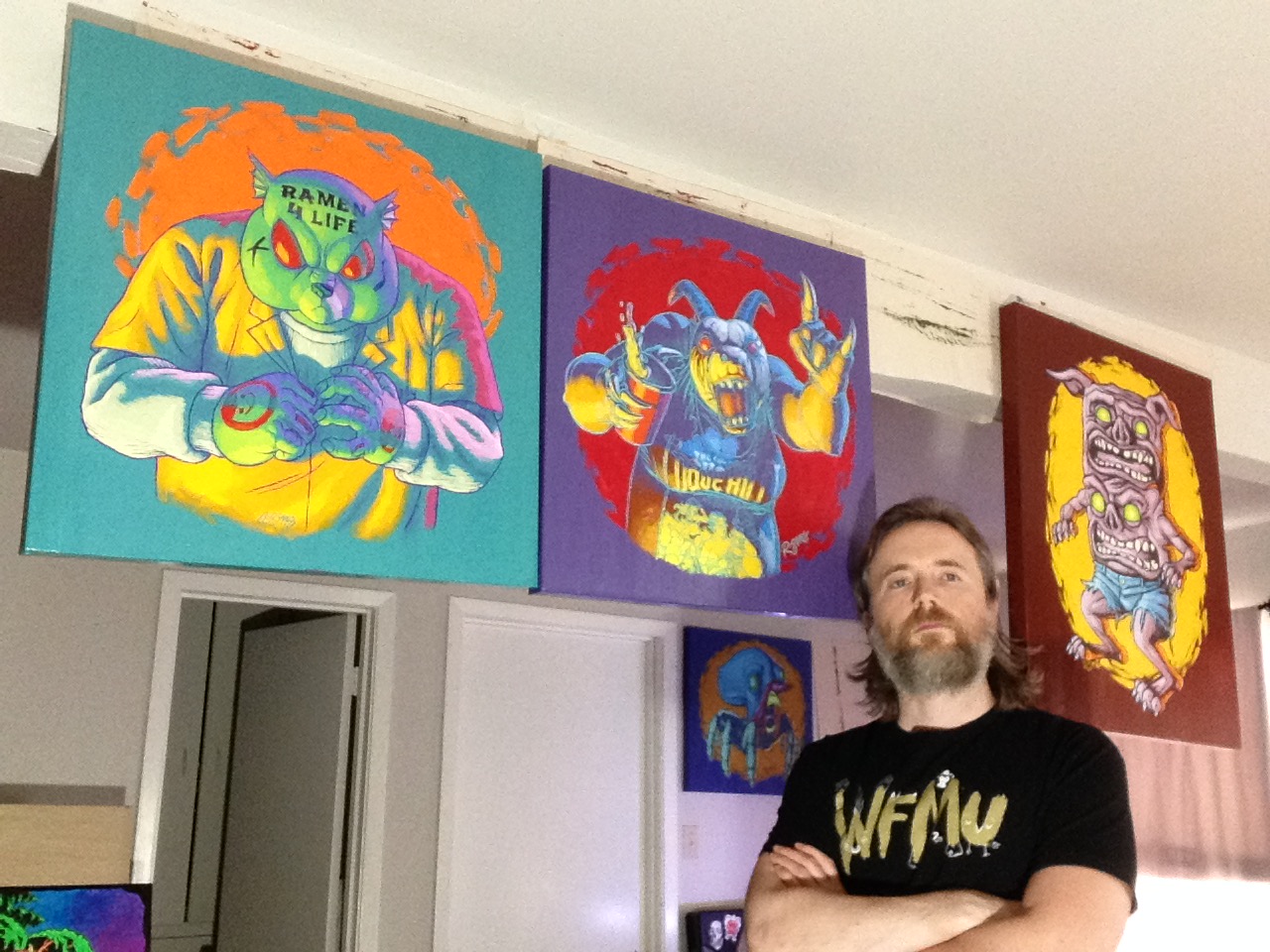 As you probably know, I’ve been shifting focus away from comics and illustration to painting. The plan had been to hold off on displaying my new series of paintings until I had completed 25-30 pieces of consistent style and quality, something I had recently learned at an artist seminar which helped explain my previous lack of progress in conquering the fine art world.

Earlier this year [or late last year (It’s a bit hazy, to be honest)], I was listening to The Goddamn Dave Hill Show on WFMU, when Dave (the host) mused about how many great artists listen to his show and have shared portraits of all-star listener and caller YngDave. My entry into the YngToon ouvre was this piece, concerning YngDave’s missing tooth. My theory? Aliens took it!

Anyway, Dave (from before) had this idea to take advantage of the amazing pool of talent at his disposal by holding an art auction to help raise funds for WFMU. In case you didn’t know, WFMU is a freeform, independent radio station that relies on listener donations to stay alive. The only prerequisite for entering the show was that the submitted work be somehow inspired by or related to the show itself. So, I got to work.

Right away, I knew I had to draw something metal as fuck. What could be more metal than a hairless sloth-lizard hybrid with goat horns? A hairless sloth-lizard hybrid with goat horns, corpse paint, AND a Goddamn Dave Hill Show t-shirt as designed by Danny Hellman, that’s what! So yeah, I did that pencil and marker sketch at work, then reworked it in Photoshop to create this color study.

From there, I rerendered it onto a canvas with oils, and voila…

The title, “I’m An Angel Witch! IIIII’M AN ANGEL WITCH!!!” is inspired by the show’s theme song, which is “Angel Witch” by the band Angel Witch from an album called Angel Witch.

A few weeks into my progress on this painting, I decided to try a second one. However, I couldn’t come up with a topic. Fortunately, Dave (mentioned earlier) got a call from Scott, formerly of Otisville Penitentiary. You see, Scott was explaining how the barter system works in prison and how his cooking skills gave him extra leverage. Ramen noodles, especially when prepared by a big house cuisinier like Scott, can be a powerful bargaining tool. This inspired Dave (Hill, from earlier in the story) to suggest they start a new gang, devoted to the procurement, preparation, and proliferation of ramen noodles. Thus was born The Ramen Gang, and thus was inspired The Ramen Gangsta!

Once again, I started sketching at work. I must have been obsessed with hairless mystery mammals, since this one is a hybrid of a human, a Japanese flying squirrel, and… I dunno, some kind of fish, which is pretty damn unmammalian. I developed the idea some more at a subsequent meeting with the Doodle Dudes.

Somewhat intimidating, but not much else. No intensity, and also no cutesiness to juxtapose against the menace. By the time I finished the digital color study in Photoshop, he’d been redesigned drastically.

And soon, this happened… 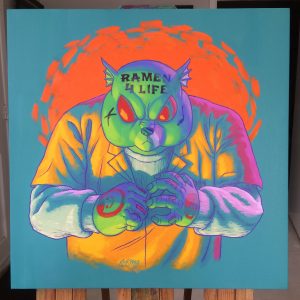 One cool thing about working in the print department of a life insurance company is that I have access to Xerox digital presses with some fairly large scanners on them, enabling me to get some high-resolution digital captures of these pieces before I ship them to Jersey City.

If you’re interested in seeing more photos and even some video clips of the painting process, head over to my Instagram page.

Better yet, if you want to see these paintings in person, go to WFMU’s Monty Hall at 43 Montgomery Ave. in lovely Downtown Jersey City the night of April 14th! You’ll be able to bid on original works by other luminaries such as Danny Hellman, Wade Snook, Tracy Dunbar, David Baumundo, Scott Eric Johnson, Melissa Weinstein, Erok Hellhammer, and several other brilliant creators with impeccable taste in radio entertainment.

Also, I’m starting a Patreon soon. I’ll write about that in a couple days.