As you may already know, I’ve been spending a lot of time working on animated projects lately.  Given the nature of the business, there tends to be a long stretch of time between doing the work and being able to talk about it.  Well, I’m pleased to tell you that one of these projects has been officially announced and is coming soon to YouTube Red.

The show’s called Kings of Atlantis.  I was fortunate to have been able to collaborate with the fine folks at Mighty Coconut on some of the storyboards for what promises to be an awesome new kids’ action/adventure show.  The premiere date hasn’t been set and I can’t show you any of my work until at least then, but in the meantime, check out the killer title card my Coconut Compadres made: 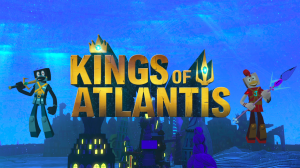 So keep your eyes peeled for that.  Once I have the info and the clearance, I’ll let you know the release date and, hopefully, see some new storyboard samples.

Meanwhile, I’m still storyboarding, designing, and illustrating another web cartoon, this one’s an indie production, and that’s all I can tell ya about that.

That’s all for now.  Stay excellent.